My mission: I won’t rest until currachs have replaced every car, bus and spaceship!

Real name Hywel Lloyd, but that’s only used in emergencies. 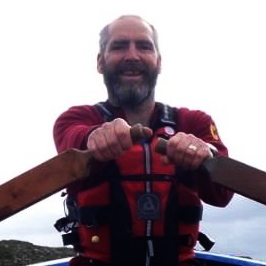 Home was a small farm in North Wales but we have long family ties to the sea and always gravitated that way. But after joining a canoe club (my brother’s idea) we drifted away from the coast for many years as we pursued the rivers of Wales, then Britain, Europe and further afield. Canoe slalom was what did it but I don’t regret that at all – I first competed for Wales aged 13 and for the GB junior team a couple of years later. In the end I became Welsh champion 5 times (or thereabouts), the top ranked junior in the UK in 1992, and competed at Junior World Championships in Switzerland and Norway.

Shortly after that I trained as a white-water raft guide, worked in Wales for a bit, then took off to guide in South Western USA. One thing led to another and I’ve now travelled, paddled and guided in some amazing parts of the world.

Six years ago, while living in Iceland, the lovely people at Arctic Adventures gave me the chance to return to the sea properly – as a sea kayak guide. I’m now a BCU level 4 sea kayak guide, REC level 3 first aider, and a lifelong devotee to bringing people and sea together: preferably without dirty, noisy motors. Sea kayaks are fab … but rowing currachs makes me smile deep down inside. You should try it!

I’m also a biologist. My doctorate in evolutionary and conservation genetics of butterflies isn’t so useful these days but, just like my paddling, my research slowly moved back to the sea…